Campion graduate featured in The Record 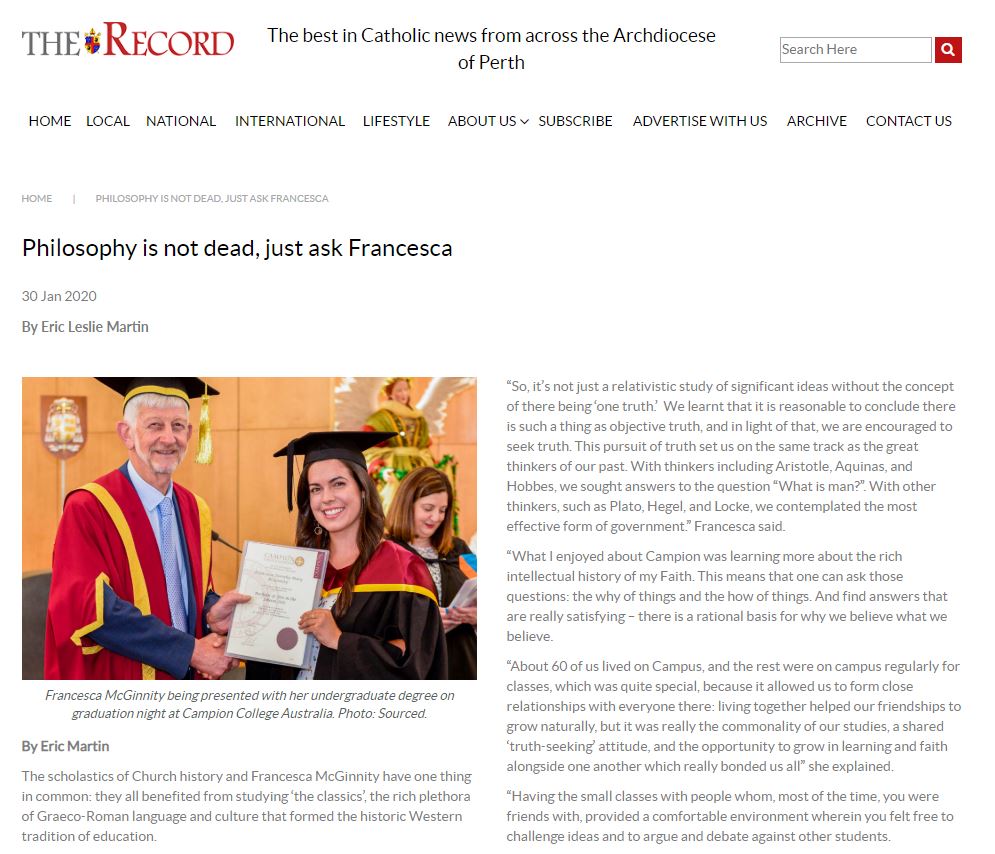 Campion graduate Francesca McGinnity was recently featured in The Record, the official publication of the Archdiocese of Perth. In the article, she discusses how the opportunity to study philosophy in an environment where her faith played an important role in the learning process prompted her decision to move from Perth to Sydney three years ago.

I think it was the idea of studying philosophy at a higher education level that initially sparked my interest in Campion.

“The idea of learning what it means to truly think for oneself, though being exposed to, and contemplating on the thoughts of other people, especially those who have shaped our culture, was so attractive. When I arrived at Campion, I realised that there was so much to learn of our Western tradition, not simply through a philosophical lense, but through an integrated study of history, literature, and theology’.” she explained.

“What is unique about Campion, is that it allows one to engage with the ideas that have shaped Western Culture in an environment which encourages a truth-seeking attitude.

“So, it’s not just a relativistic study of significant ideas without the concept of there being ‘one truth.’ We learnt that it is reasonable to conclude there is such a thing as objective truth, and in light of that, we are encouraged to seek truth. This pursuit of truth set us on the same track as the great thinkers of our past. With thinkers including Aristotle, Aquinas, and Hobbes, we sought answers to the question “What is man?”. With other thinkers, such as Plato, Hegel, and Locke, we contemplated the most effective form of government.” Francesca said.

“What I enjoyed about Campion was learning more about the rich intellectual history of my Faith. This means that one can ask those questions: the why of things and the how of things. And find answers that are really satisfying – there is a rational basis for why we believe what we believe.

“About 60 of us lived on Campus, and the rest were on campus regularly for classes, which was quite special, because it allowed us to form close relationships with everyone there: living together helped our friendships to grow naturally, but it was really the commonality of our studies, a shared ‘truth-seeking’ attitude, and the opportunity to grow in learning and faith alongside one another which really bonded us all” she explained.

“Having the small classes with people whom, most of the time, you were friends with, provided a comfortable environment wherein you felt free to challenge ideas and to argue and debate against other students.

“It was really an environment conducive for discussion which led to further learning.”

View the full article at: https://therecord.com.au/news/local/philosophy-is-not-dead-just-ask-francesca/

Find out more about Philosophy at Campion: www.campion.edu.au/philosophy