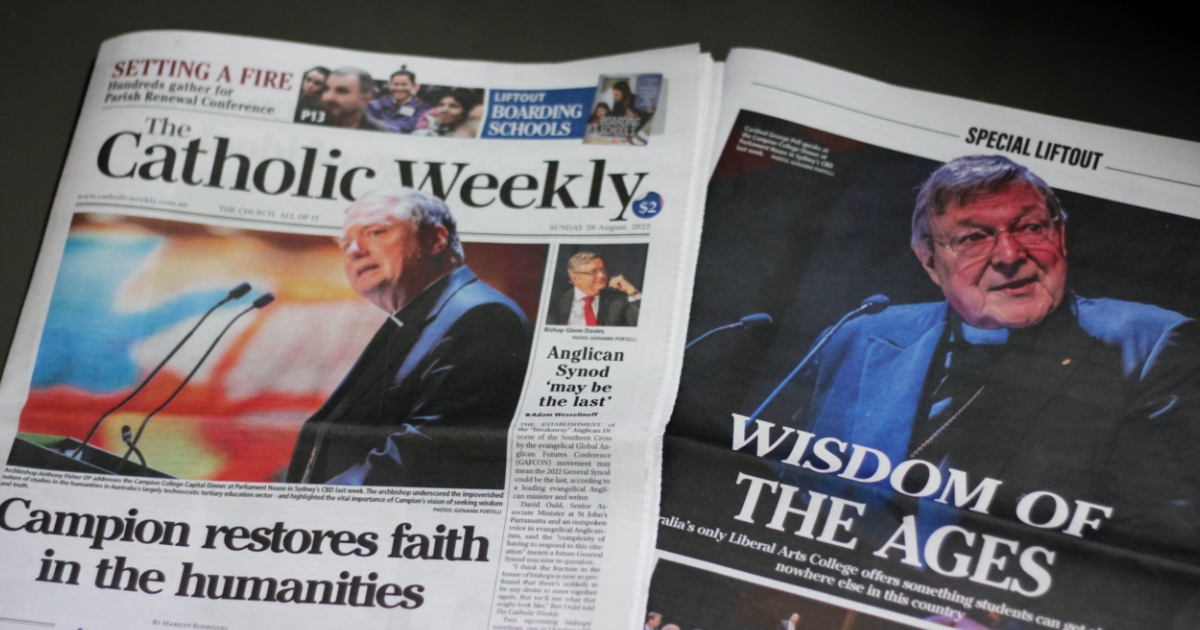 Campion College has been featured in the latest edition of the Catholic Weekly:

Australia’s two most senior Church leaders – one serving and one retired – issued rousing calls to back the nation’s only Liberal Arts college as a vital contribution to education of the young and building the spiritual and cultural future of the nation during a special dinner at Parliament House in Sydney last week.

At the dinner for Campion College, Archbishop Anthony Fisher OP blasted as “short-sighted” the intellectual decline of ideologically-driven humanities departments in Australia’s universities and rued the disappearance of the best the humanities could offer, saying their loss robs young people intellectually and impoverishes the culture.

Meanwhile, in a wide-ranging keynote address, Cardinal George Pell surveyed the sea-change that has occurred in Australian politics and society over the last 50 years as he reflected on its negative impacts on society, Christianity and the Catholic faith.

The Liberalism project from which society and the Church have received substantial benefits is also under sustained assault in a “post-Christian vacuum”, he said, though he did not believe the battle for the future was lost.

He also made pointed observations and criticisms of the recently-concluded Plenary Council, which he said was “largely irrelevant to the preaching of the gospel and the threat of decline, being more concerned with the redistribution of power.”

Citing the University of Sydney as an example, Archbishop Fisher said that as governments had incentivised job-readying courses and dis-incentivised the humanities, tertiary education leaders have followed suit, radically diminishing the liberal arts offering at Australian universities.

“When I did my arts law degree there were two whole rival philosophy departments, two whole rival economics departments, an excellent history facility, a music school, serious opportunities to study literature, a jurisprudence school within the law faculty, and more,” the archbishop said.

“They’re all gone. Now the humanities are all in one little department together, things like jurisprudence are gone altogether. That’s one of the big sandstone universities, and where [universities] do offer anything in those areas they’re now reliably left ideological. The loss for our students has been enormous.”

Archbishop Fisher was a special guest at the dinner along with a long line of luminaries including former Prime Minister John Howard, federal Opposition leader Peter Dutton and Cardinal Pell.

The college is currently undergoing a $18.5 million building expansion to boost its academic and student accommodation capacity at Toongabbie, with its president Paul Morrissey telling guests it will also be a centre for culture in Sydney’s west.

Cardinal Pell praised the college as “a pearl in the desert” in offering an education grounded in the western tradition.

“They learn of the central virtues, about faith and reason, about the search for meaning. They learn to analyse and synthesise, to say what they mean and mean what they say, to write and think logically and clearly and to have practical wisdom, something worthwhile to say on the basic human issues beyond whatever profession they might choose to follow,” he said.

“Much of what Campion College now strives to do was done 100 or even 50 years ago for the elite and the battlers by family, school, church, university and even much of the media.”

Last year academics defended the value of the humanities, also known as the liberal arts, after the former Federal Government made changes to higher education funding under its Job Ready Graduates program. The sweeping changes saw fees for subjects such as history, literature, music and philosophy more than double.

Archbishop Fisher said that these disciplines “feed souls and imaginations and set the young up for a life that is about more than work, but they also make them better at their work.

He said his other reason for being passionate about the liberal arts is his belief that Christian, humanistic and democratic beliefs and mores are carried as much by them, or even more, than catechetics and formal ethics education.

“In our faith schools today, with too little help from home and too little connection with parish, and against cultural forces as powerful as the social media and the peer group, it’s asking too much of our religion teachers to transmit Christian faith, fundamental values, through a few hours of catechesis a week alone,” he said.

“To rob young people of these disciplines at a tertiary level is to ensure that much that is greatest about our civilisation will not be transmitted to them or examined by them, at least academically. They will suffer intellectual and cultural malnutrition.”

“The overwhelming presence of Identity Politics and Critical Race Theory has homogenised the humanities to such an extent that it is almost impossible to differentiate between the disciplines,” the report said.

Both prelates made it clear that they see Campion as essential to the future.

“Because this education is good for individuals, it follows that it is good for society,” Cardinal Pell said.

“Much of what Campion College now strives to do was done 100 or even 50 years ago for the elite and the battlers by family, school, church, university and even much of the media. No longer.”

The 28 August edition also includes a three-page lift out of Cardinal George Pell’s speech from the event.

Article written by Marilyn Rodrigues and republished with permission from The Catholic Weekly [28 August 2022].