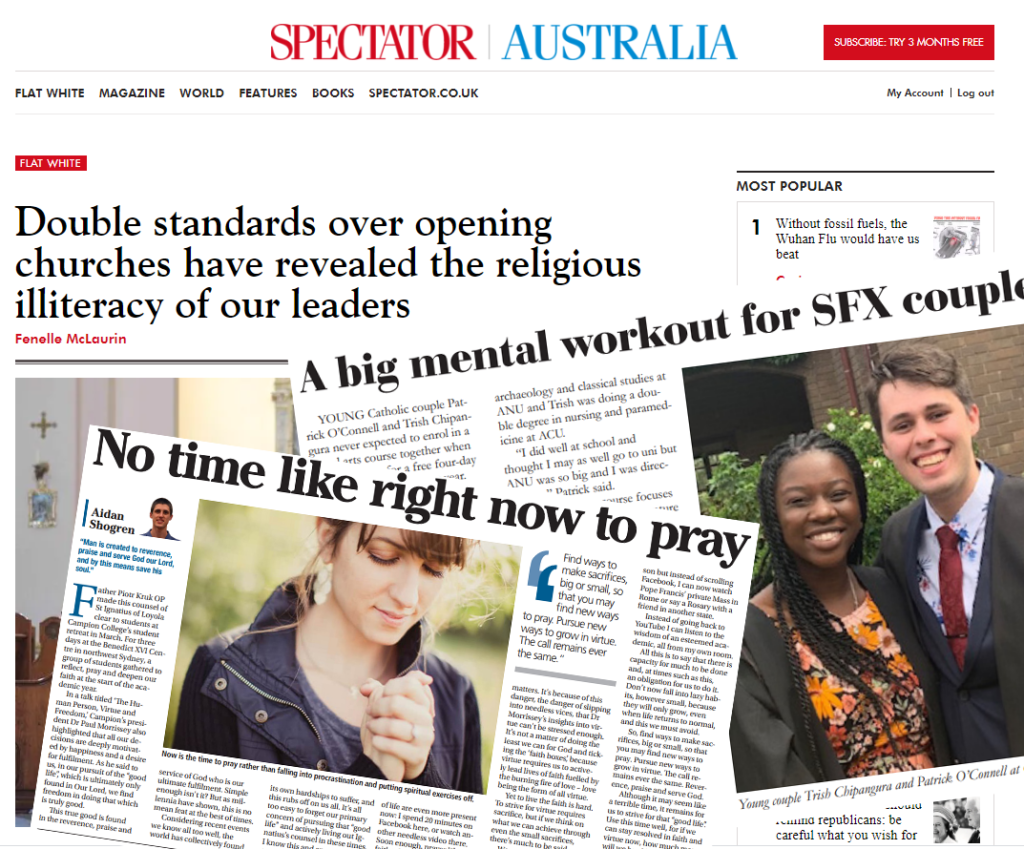 Four of Campion’s current and former students made headlines this week, with articles appearing in three publications.

On Sunday, the Spectator magazine published an article by alumna Fenelle McLaurin about the “religious illiteracy” of the country’s leaders while The Catholic Weekly published a reflective piece by student Aidan Shogren, and The Catholic Voice featured students Trish Chipangura and Patrick O’Connell.

Catholic Voice spoke to first-year students Trish and Patrick about their experience at Campion :

YOUNG Catholic couple Patrick O’Connell and Trish Chipangura never expected to enrol in a liberal arts course together when they signed up for a free four-day introductory program last year.
Both were at uni in Canberra at the time, but the demo lectures, mock tutorials and small campus culture had them hooked.
“It’s a different kind of world,” Trish, 20, said. “Like you are in your own little nook. We had mock classes about Ancient Rome and studied an Edgar Allan Poe poem.”

The pair, who met as students at St Francis Xavier College in Florey and graduated in 2018, put on hold their university courses in Canberra to enrol at Campion College this year. An early enrolment $1500 fee reduction helped.
The Catholic liberal arts school is in Old Toongabbie, about 37kms west of Sydney.
Patrick had been studying archaeology and classical studies at ANU and Trish was doing a double degree in nursing and paramedicine at ACU.
“I did well at school and thought I may as well go to uni but ANU was so big and I was directionless,” Patrick said.
“The Campion course focuses on philosophy, theology, literature and history. I liked the intimacy and the teachers know you personally.”

“A liberal arts education teaches you how to think and gives you broad knowledge and skills,” Patrick said.

In the Catholic Weekly, third-year student Aidan Shogren reflected on Campion’s retreat at the beginning of the semester in a piece exhorting Catholics to use the lockdown as a unique time to deepen their faith:

In a talk titled ‘The Human Person, Virtue and Freedom,’ Campion’s president Dr Paul Morrissey also highlighted that all our decisions are deeply motivated by happiness and a desire for fulfilment. As he said to us, in our pursuit of the “good life”, which is ultimately only found in Our Lord, we find freedom in doing that which is truly good.

Considering recent events we know all too well, the world has collectively found its own hardships to suffer, and this rubs off on us all. It’s all
too easy to forget our primary concern of pursuing that “good life” and actively living out Ignatius’s counsel in these times. I know this and am no stranger to it. The creature comforts of life are even more present now: I spend 20 minutes on Facebook here, or watch another needless video there.
Soon enough, prayer life and faith take a back seat and an awful lot of time is spent filling up the days with trivial matters. It’s because of this
danger, the danger of slipping into needless vices, that Dr Morrissey’s insights into virtue can’t be stressed enough.
It’s not a matter of doing the least we can for God and ticking the ‘faith boxes’, because virtue requires us to actively lead lives of faith fuelled by the burning fire of love – love being the form of all virtue.
Yet to live the faith is hard.
To strive for virtue requires sacrifice, but if we think on that we can achieve through even the small sacrifices, there’s much to be said.

We are seeing, far and wide in this age of technology, a new way to live out the faith. One might not be able to visit the sick or go to Mass in person but instead of scrolling Facebook, I can now watch Pope Francis’ private Mass in Rome or say a Rosary with a friend in another state.
Instead of going back to YouTube I can listen to the wisdom of an esteemed academic, all from my own room.
All this is to say that there is capacity for much to be done and, at times such as this, an obligation for us to do it.
Don’t now fall into lazy habits, however small, because they will only grow, even when life returns to normal, and this we must avoid.

The Spectator online featured an article by 2012 graduate Fenelle McLaurin, who tackled what she describes as an “religious illiteracy” amongst our nation’s leaders:

Last week the New South Wales state government announced the easing of restrictions for pubs, clubs, restaurants, museums and libraries so that up to 50 people could be hosted at any given time from the first of June. It took, however, a full week and lobbying from Church leaders and citizens of faith for them to extend those same changes to places of worship, thus revealing, on a generous interpretation, a deep religious illiteracy among the state’s leadership. Granted, once citizens lobbied the government adjustments were made fairly quickly, but the initial oversight is the primary concern here: religious worship was deemed not as important as having a drink at the pub. As vital as the latter is, anyone who practices a faith could see the glaring disparity of treatment between the two, so why did a Coalition government not see it? Queensland’s Annastacia Palaszczuk was far more sympathetic in her new coronavirus restrictions released this morning.

Nobody likes a double standard and that is exactly what this was until the Berejiklian Government realised their mistake — thanks to the lobbying of Church leaders and members of the public — and fixed it. But like all mistakes, there are consequences even after they have been rectified and in this case, it is that citizens of faith saw that some of their parliamentary representatives seriously misunderstand and undervalue the role of religious practice.

But there is a deeper reason for the religious illiteracy demonstrated by some of our parliamentary representatives and that is that we as a society are, by and large, religiously illiterate. For a long time, we have been told to “keep religion out of it.” The social mindset is that religiously informed views pollute clarity of thought and accessibility of argument, and so should be kept inside homes and churches. If you hold a view and you’re also a person of faith, your faith had better not be the reason you hold that view. Especially if it is at odds with the status quo.

This approach is gravely problematic. It leads to a lack of authentic faith-informed discourse and asks people of faith to divest themselves of their most important decision-making tools and their understanding of their identity. It holds no esteem for religious wisdom or the unique contributions that faith-practice can offer public life. It starts from the premise that religion is not only non-essential, but it is also a hindrance. Consequently, religious citizens who are unused to discussing topics which could include their religious wisdom are ill-equipped to do so even if they wanted to, and their fellow citizens are ill-equipped to listen and exchange ideas with mutual respect.

And that, I think, gets a little at why there was a double standard for pubs and churches. You don’t know what you don’t know, and after decades of religious folk being told to keep their religion to themselves, the government didn’t think it was that important. After all, you can do that at home, right?