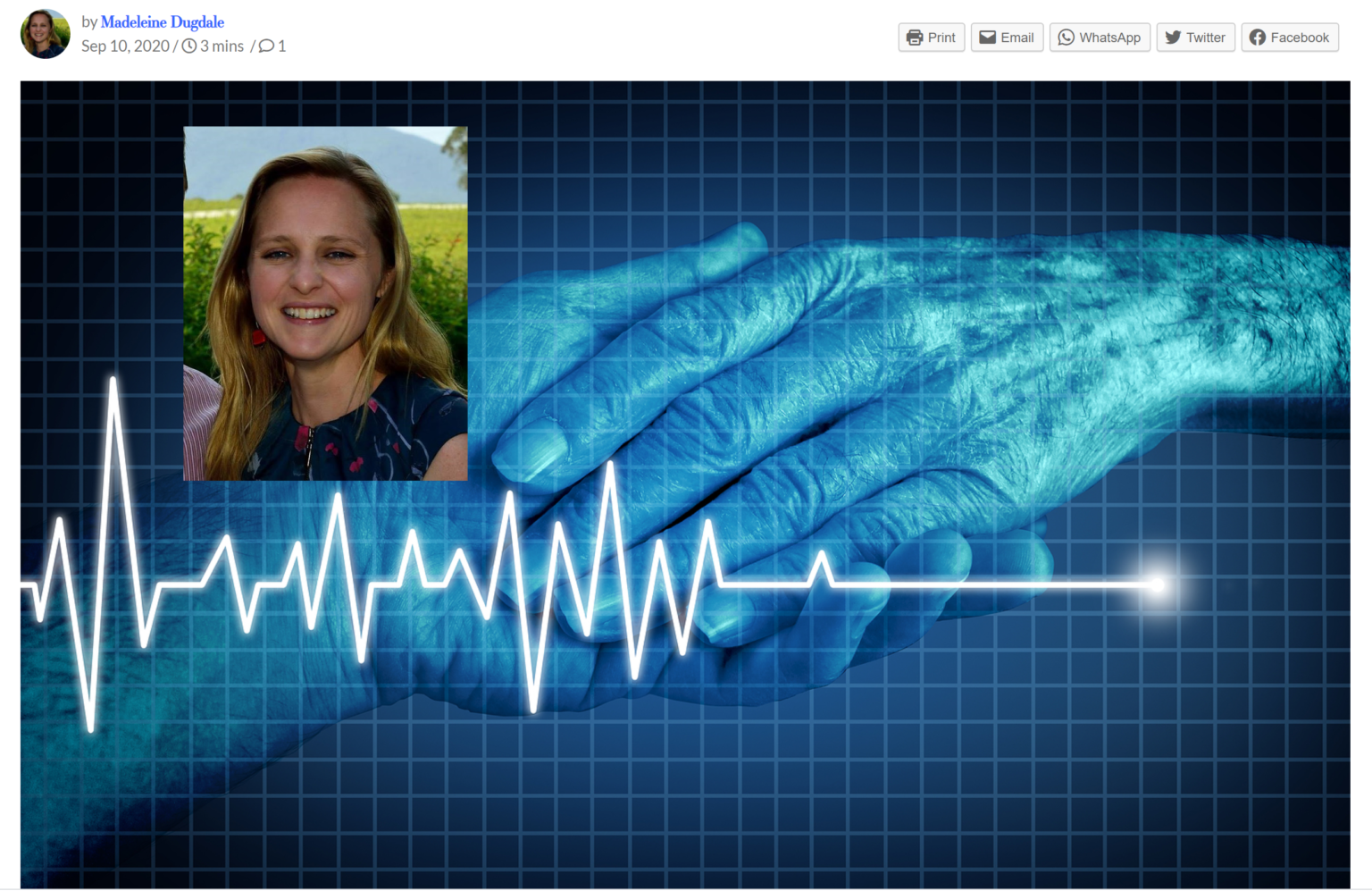 Campion alum and 2008 graduate Madeleine Dugdale has written an impassioned critique of Victoria’s euthanasia laws in online magazine Mercatornet, drawing on the recent death of her husband’s grandmother by euthanasia:

My husband’s grandmother took her life yesterday in a Victorian nursing home. After 87 years of a life well-lived, she swallowed state-sanctioned poison to end her life.

The “health” professionals here called it medication, but the aim of taking medicine is to improve one’s health, not destroy it. Use all the Orwellian double-speak you like to sugar coat it — suicide is suicide.

Her death certificate will most likely read, “cause of death”: cancer. Not suicide. How transparent and honest!

Grandma herself said she was not in any physical pain. In fact, only hours before her death, she said she just feared being in pain. Apparently nowadays, fear of what might occur is a form of intolerable suffering, which ticks the criteria in Section 9 (d) (iv) of the Voluntary Assisted Dying Act. That states: “the person must be diagnosed with a disease, illness or medical condition that (iv) is causing suffering to the person that cannot be relieved in a manner that the person considers tolerable.”

How conveniently subjective and open-ended. So much for tight restrictions.

We wax lyrical about removing the stigma around mental health. Yet, in this situation, was it ever put to Grandma that, with the help of the best palliative care and family support, we could all help to alleviate this dear old woman’s fear of pain? Was this discussed on the same playing field as euthanasia?

And being mere grandchildren in an environment where contentious issues are too uncomfortable and so are quickly shut down, there was little my husband and I could do to help.

Our failure is indicative of another double standard. We rightly offer help and throw funding at young people in the same situation. But for an old sick woman who had given her life for others, we didn’t even try. We are a discriminatory, ageist society. Our medical professionals, who are meant to “do no harm”, whisper into the ears of the vulnerable to imply that excruciating pain is imminent; that painless suicide is dignified; that a painful death is undignified.

Why do our medical professionals fail to discuss palliative care on the same playing field as euthanasia?

I can hear the clamour of indignation and phoney outrage now: it’s what she wanted, it was her choice. But I ask again, were all options put on the table? I don’t think so.

Admitted into a nursing home before a terminal diagnosis and then recently widowed, she said just last week that she was “over” being locked up.

That’s it basically: she was just “over it.”

If family members had initially welcomed her into their homes with open arms and cared for her for as long as possible, at least one factor which most likely led to her death would’ve been eliminated. And once she became terminal and in need of more significant medical care, what she needed was more visitors, access to her family, before and after our draconian, disproportionate Covid laws came into play.

Keeping us apart does not keep us together.

But this asks a lot of us all and character, virtue and selflessness are not things we gain overnight. It’s a whole way of life, practised over a lifetime.

Grandma’s “choice” has a far-reaching effect as her choice actually impinges on the freedom of others. So many were forced to play a part in her death, whether they wanted to or not, from pharmacists, to nurses, to the delivery man who dropped off the vial, and even her own son, who was “uncomfortable” with her request for him to stay and watch her take her life.

And it took over an hour for her to breathe her last breath.

Many would insist that the choice for medically assisted suicide, made in advance as part of a well-thought out “end of life plan”, is an empowering and triumphant act of autonomy. They defend the act on the assumption that all personal choices are good, so long as one chooses them, and believes them to be right.

It is this ethical framework that creates the very worst slippery slope and takes us down the most ghastly of rabbit holes, where loving grandmothers consume poison to avoid pain that could’ve been managed and loneliness that could’ve been avoided by the good palliative care available to her, and real compassion from family members and close friends.

Committing suicide is not courageous. It’s an horrendous act of desperation and defeat, brought on by the depression that so many face unnecessarily at the end of their lives.

As a society we are complicit in the legalisation and practice of euthanasia and it puts families in a terrible predicament. These decisions do not unite families; they are divisive. In Grandma’s death, obfuscation and secrecy stymied any intervention. Any questions or conversations on the matter by close family members were silenced. Heaven forbid we really discuss all options.

If it had been a natural death, how different yesterday would have been.