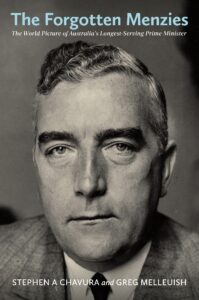 The Forgotten Menzies, co-authored by Dr Chavura and Campion academic board member and honorary fellow Greg Melleuish, provides a new look at Menzies which seeks to “transform your understanding of the beginnings of the Liberal Party”, according to Melbourne University Press’s pre-order page.​

Sir Robert Gordon Menzies was the founder of the Liberal Party of Australia.

As well as being Australia’s longest-serving prime minister, Menzies was the most thoughtful. Menzies’ world picture was one where Britishness was the overriding normative principle, and in which cultural puritanism and philosophical idealism were pervasive. Unless we remember this cultural background of Menzies’ thought then we will seriously misunderstand what he meant by the very project of liberalism. The Forgotten Menzies argues that Menzies’ greatest aspiration was to protect the ideals of cultural puritanismin Australia from two kinds of materialism: communism; and the mindset encouraged by affluence and technological progress. Central to Menzies’ project of cultural and civilisational preservation was the university, an institution he spent much of his career extolling and expanding. The Forgotten Menzies makes an important contribution to the history of political thought and ideology in Australia, as to understanding the largely forgotten but rich intellectual origins of the Liberal Party.

Deon Testore is the president of Campion’s Debating Society.

Dr Chavura lectures in Australian and ancient history at Campion.

The Forgotten Menzies will be published on 4 May 2021.