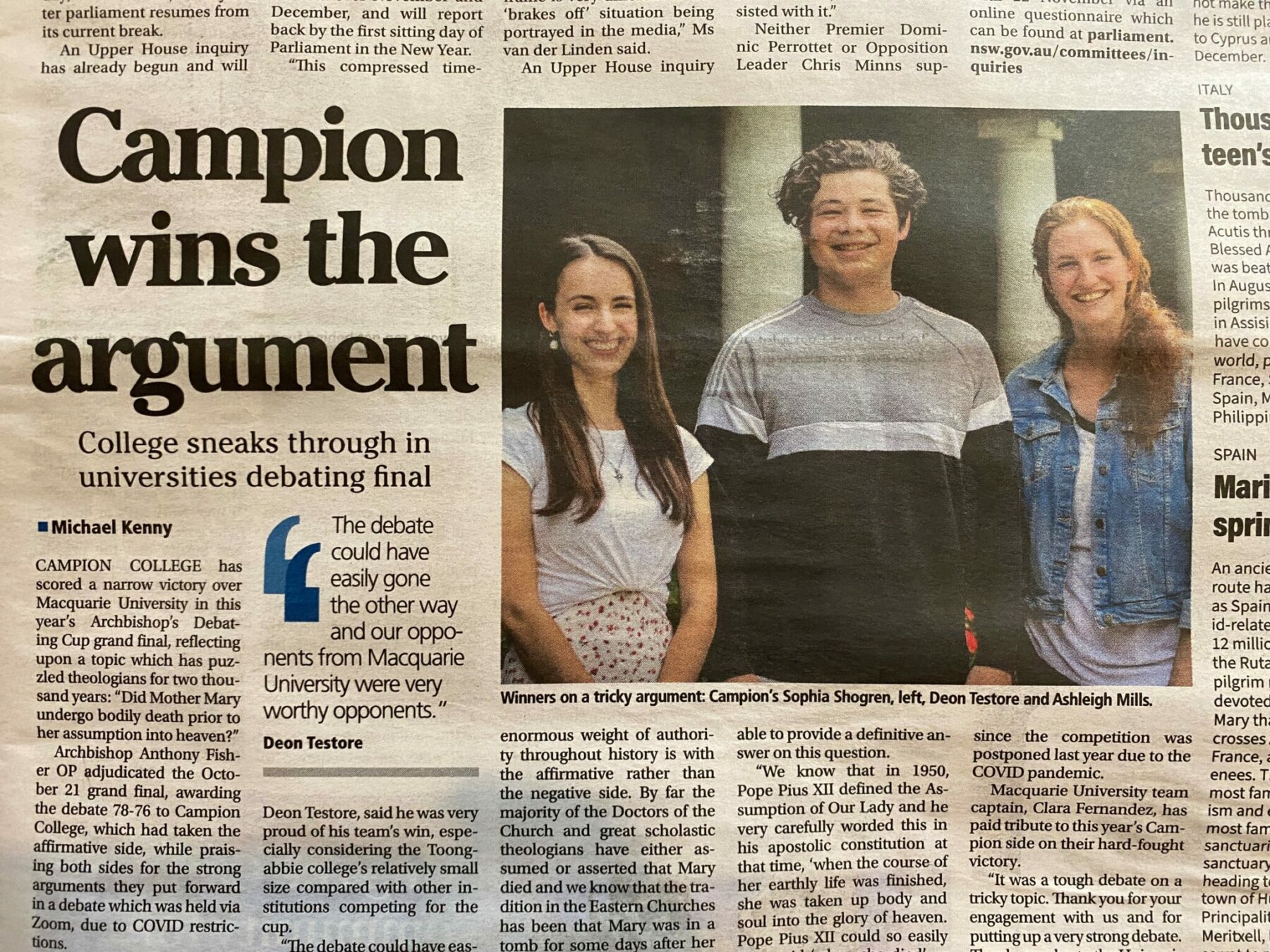 Campion’s win over Macquarie University in last week’s Archbishop’s Debating Cup grand final has been featured in this week’s edition of the Catholic Weekly:

Campion College has scored a narrow victory over Macquarie University in this year’s Archbishop’s Debating Cup grand final, reflecting upon a topic which has puzzled theologians for two thousand years: “Did Mother Mary undergo bodily death prior to her assumption into heaven?”

Archbishop Anthony Fisher OP adjudicated the October 21 grand final, awarding the debate 78-76 to Campion College, which had taken the affirmative side, while praising both sides for the strong arguments they put forward in a debate which was held via Zoom, due to COVID restrictions.

The Campion College team drew heavily upon statements from recent popes, including Pope Pius XII’s apostolic constitution, Munificentissimus Deus, to argue that Mary chose to undergo death in imitation of her son, Jesus, uniting her maternal sacrifice with His sacrifice.

The Macquarie University team argued that since Mary was conceived without original sin since as Catholics we believe in her Immaculate Conception, she could not have died and was instead assumed body and soul into heaven.

Campion College captain, Deon Testore, said he was very proud of his team’s win, especially considering the Toongabbie college’s relatively small size compared with other institutions competing for the cup.

“The debate could have easily gone the other way and our opponents from Macquarie University were very worthy opponents. As a small college, there’s a really strong sense of solidarity amongst our students and it really means a lot to have an achievement like this on our record,” Deon said.

Macquarie University were the defending champions, last winning the cup in 2019, since the competition was postponed last year due to the COVID pandemic.

Macquarie University team captain, Clara Fernandez, has paid tribute to this year’s Campion side on their hard-fought victory.

“It was a tough debate on a tricky topic. Thank you for your engagement with us and for putting up a very strong debate. Thank you also to the University Chaplaincies for helping us nurture our gifts and talents in this way,” Clara said.

Archbishop Fisher has invited members of the winning team to a dinner with him at Cathedral House over coming weeks, where they would be formally presented with the debating cup in person.

“I’m so proud of the young Catholics of Sydney: the young thinkers for the future of our Church. I pray that they will continue using their hearts and minds to glorify God, to seek the truth and communicate that then with others,” he said.