Campion lecturer: the link between A Christmas Carol, Camelot and Seinfeld 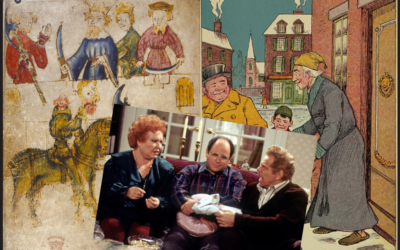 Campion lecturer Stephen McInerney has written a delightful reflection on Christmas looking at Seinfeld and English literature in The Australian.

Dr McInerney has lectured in literature at Campion since its inception. This semester he will be teaching Medieval and Renaissance literature.

His article is reproduced here:

One of the more humorous if irreverent send-ups of the Christmas season occurs in Season 9 of Seinfeld where Frank Costanza commemorates “Festivus for the rest of us”, a celebration for non-religious people who are appalled by the commercialism of Christmas. It includes rituals such as the “airing of grievances” and “feats of strength”.

While the origin of “Festivus” apparently dates back to the 1960s, when one of the writers on Seinfeld first experienced it at the hands of his father, the link between the Christmas season, the airing of grievances and feats of strength may be much older.

A short excursion through two great Christmas books bears this out. Charles Dickens’ A Christmas Carol famously depicts the airing of grievances against Scrooge by the ghosts who visit him and the people he watches in Christmases past, present and future. His conscience is gradually touched and transformed as he becomes a convert to the real spirit of Christmas. Where he had been miserly, he becomes generous; where he had once been surly, now he is joyous.

The story suggests that as unpleasant as it can be to hear our faults identified, the experience can be salutary, even life-changing, assuming whatever character assessments we receive are offered in the right spirit, and assuming we are willing to change.

The “New Year resolution” probably has its origins as a response to just such “airing of grievances”. For most of us, sadly, such resolutions are often short-lived. By the end of March, the kilos we lost when we gave up booze in February have started to reappear. We’ve already lost touch with friends we reconnected with at a January party. The lawn is neglected again.

Yet the season always has a way of convincing us the next year might be different. And maybe it will be, as long as we have what Scrooge has — what medieval moralists called “a firm purpose of amendment”.

The epic poem opens at Camelot, with the knights of the Round Table and their ladies attending a banquet to celebrate the New Year as part of the 12 Days of Christmas festivities. The King will not start his meal until he hears a tale of deeds, but he is interrupted by the bizarre appearance of a Green Knight who arrogantly walks in and starts to challenge the knights as part of what he calls a Christmas game.

The proposed feat of strength, though, is a strange one. Rather than taking up arms, the Green Knight instead bares his neck and asks for one of the knights of the Round Table to cut off his head. The only catch is the knight must in turn agree to receive the same treatment in a year’s time, if the Green Knight should somehow miraculously survive the blow.

Sir Gawain, the youngest of the knights, accepts the challenge, and cuts off the head of the Green Knight. He is more than a little perturbed, however, by the Christmas miracle that follows. The Green Knight stands, picks up his head like a lantern and, head in hand, proceeds to speak. He tells the young Gawain that he expects him to honour his vow to receive a blow on the neck a year from now, at the Green Chapel.

But there is another deed Sir Gawain must perform to prove himself — resisting the attempt by his host’s wife to seduce him. The moral challenge seems even greater than the physical one. It’s one thing to offer one’s neck to be struck by a crazy green man with a sword; it’s quite another to resist the charms of a beautiful woman while nonetheless making her feel she’s not been rejected.

I suppose some Christmas parties present such moral “feats of strength” even to this day. Or perhaps that’s a male fantasy.

Whatever the case, Sir Gawain succeeds both in resisting the lady’s attempted seduction and in surviving the glancing blow by the Green Knight’s sword. All he receives in the end is a small wound on the neck. It is a sign that, notwithstanding his moral rectitude and physical bravery, even a figure as noble and brave as Gawain is not perfect. None of us are, except for the child in the crib. And that’s really the point.

It’s a lesson worth heeding, both when we air our grievances about others, as we might be inclined to do over a few drinks this Christmas, and when, on New Year’s Eve, we look back at how well (or poorly) we kept our resolutions over the past year.

And then there’s the feat of strength of getting out of bed on January 1.