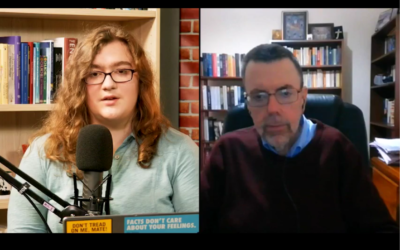 Campion got a shout-out during a discussion on the state of Australian universities on the Young IPA’s Generation Liberty video podcast with journalist and author Greg Sheridan.

During a discussion about encroaching cultural Marxism and identity politics found in many humanities courses, Mr Sheridan pointed to Campion as an example of the liberal arts taught well.

“There is an enormous mass of deep unrelenting stupidity at Australian universities,” Mr Sheridan said. “I would like people to be more energetic at creating alternatives. There’s Campion College in Sydney, which is an independent liberal arts college, the only one in Australia.

“The people who founded Campion, one of the reasons they did was it was easier just to build something new and beautiful, than try to reform something old and corrupt and irredeemable.”

Commenting on the 2018 opposition to the Ramsay Centre’s proposed ‘great books’ undergraduate degrees, which follow a similar model to Campion’s liberal arts degree, Mr Sheridan said: “the idea that reading the great books of the Western canon would create uncritical minds is bizarre”.

Mr Sheridan visited and later wrote about Campion in his 2018 book God is Good For You: A Defence of Christianity in Troubled Times.

Campion has been a strong proponent of a traditional approach to studying the liberal arts, or humanities, as the foundation for a tertiary education.

Find out more about Campion’s BA in the liberal arts.