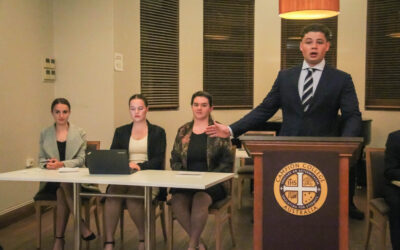 Campion College is on its way to the semi-finals of the Archbishop’s Debating Cup after defeating Australian Catholic University on Thursday over the topic, “should frozen embryos be adopted?”.

I won the coin toss and decided that Campion would argue in the affirmative. Our first speaker in the online debate was third-year Sophia Shogren, our second speaker was second-year Ashleigh Mills, and I was the third.

Our opposition at ACU formed their case on embryonic adoption’s material connection to the immoral IVF industry, the harmful biological impacts on the adoptive mother, and the possibilities of a conditional baptism for these frozen embryos, before letting them die.

The Archbishop’s Debating Cup is a prestigious Catholic intervarsity competition which aims to foster intellectual engagement with modern social and political issues from a Catholic perspective and encourage arguments grounded in Church teaching. Each speaker had 10 minutes to speak and build their case.

Our adjudicator was renowned Australian Theologian professor Tracey Rowland. She scored the debate 72 to 66 out of 90 (30 points total for each speaker, with 10 points for matter, manner and method respectively), with Campion consistently beating ACU in manner and method, and ACU edging ahead in matter.

Thursday’s victory guaranteed us a place in the semi-finals, in which we will be debating the winner of the upcoming debate between USYD and UTS, adjudicated by Campion’s very own Dr Jeremy Bell. The topic for that debate will be “can a virtuous pagan achieve salvation?”