Christians: The Urgent Case for Jesus in our World Book Review 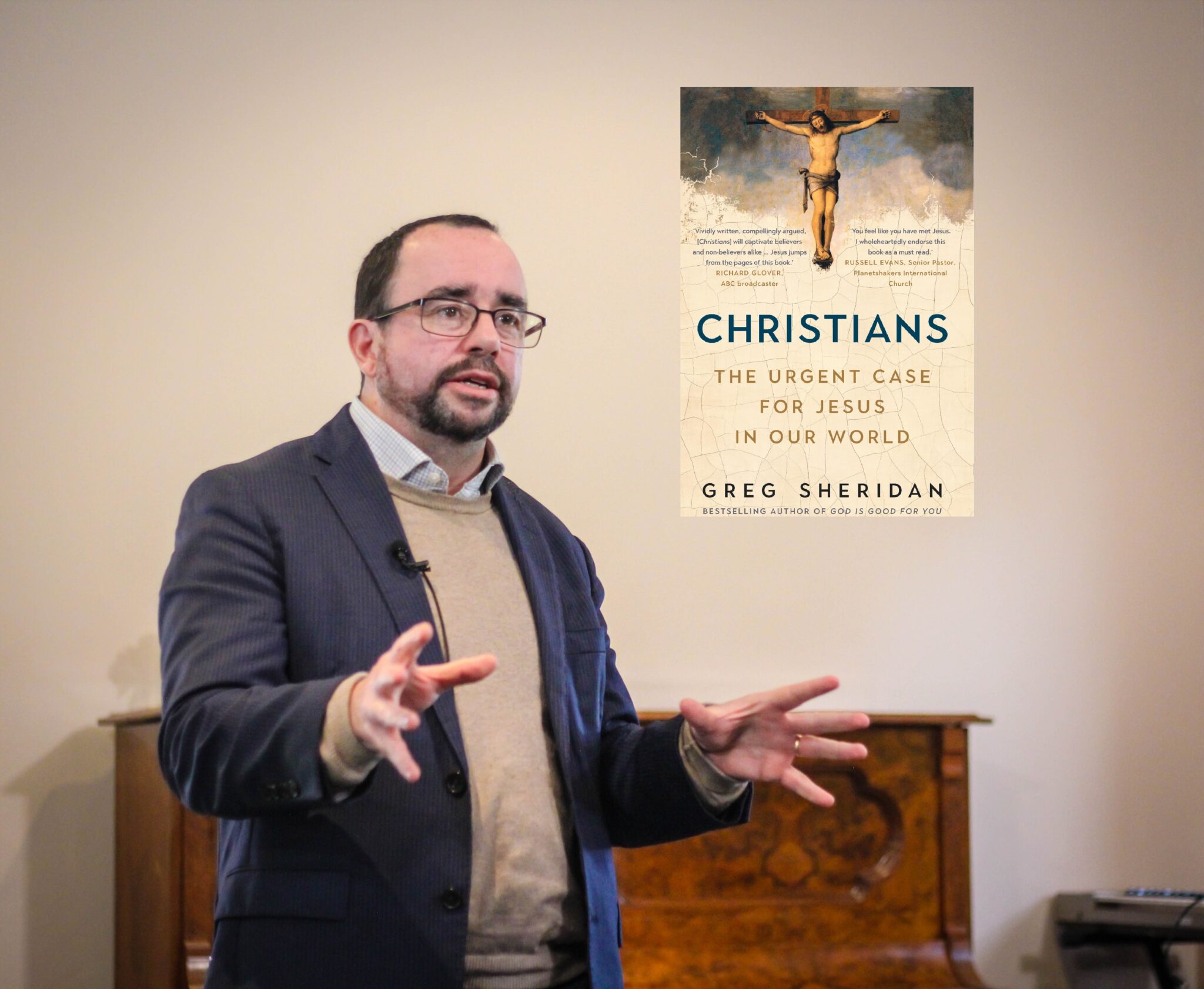 Greg Sheridan’s latest book, Christians: The Urgent Case for Jesus in Our World.

Norm Macdonald, the brilliant Canadian comedian who sadly passed away in September, was famous for his “take downs” of celebrities.

He also enjoyed calling out the lack of courage of so-called brave comedians who poked fun at religion. In one interview he lamented the rise of hack atheist comedians, “It’s so dull.

To be talking about being an atheist in West Hollywood is not the bravest take to make.

If a comic went up and said, ‘Jesus Christ is my Lord and Saviour,’ I’d say, ‘Damn, that guy is a brave comic!’”

As a judge for a TV talent show, Macdonald shocked the audience when he called out a budding comic for his religious ignorance after he made a joke comparing the Bible unfavourably with the Harry Potter series.

“I think if you’re going to take on an entire religion you should maybe know what you are talking about,” Macdonald said.

This clip is well worth looking up just to see the reaction of the contestant and the other judges to Norm’s straight talking.

This unfashionable straight talking is most likely the reason that Macdonald’s fame as a comedian was somewhat muted.

The West has well and truly entered a post-Christian era and this budding comedian is simply a product of this.

This is nowhere more apparent than in the illiteracy evident in the general population regarding Christianity, religion more generally, and the Bible.

It is into this pool of ignorance that Greg Sheridan has waded with his new book, “Christians: The Urgent Case of Jesus in the World.”

The book is divided into two parts. The first is called ‘Jesus and his Friends’, the second, ‘Christians and their new Worlds.’

The first looks more specifically at the Gospels and the key characters therein and well as the doctrinal significance that emerges from them; the second concerns Christians today, including several interviews and profiles of Christians in Australia today.

This structure, similar to his previous book “God is Good for You,” succeeds combining a more intellectual discussion in part 1 with a more personal reflection in part two.

Considering the state of ignorance of the contemporary West in matters of religion, Sheridan presumes very little prior knowledge and argues persuasively for the historicity and the significance of the Gospels.

A significant and unfortunate trend in New Testament scholarship over the past couple of centuries has been the demythologising of the Gospels, a trend that has reached its zenith in the “beyond parody” of the Jesus Seminar.

This Seminar is made of biblical scholars who believe that nothing miraculous or anything that even hints at Jesus’ divinity in the Gospels is real history. That Jesus is nothing more than a religious sage who dined with outcasts and performed some psychosomatic healings.

Sheridan correctly points out that there is something of a pushback to this trend and that for a figure of the ancient world, the historical evidence of Jesus’ existence and history is extremely strong and although it’s impossible to “prove” the historical accuracy of the Gospels, recent archaeology and language studies support the sociological and geographical accuracy of the Gospels.

Sheridan makes use of one of the best biblical scholars of the age, Richard Bauckham, and his excellent book, “Jesus and the Eyewitnesses.”

Bauckham is quoted: “I take the Gospels to be substantially based on the testimony of eyewitnesses who had known Jesus in his lifetime.”

This flies in the face of a lot of modern biblical scholarship which tends to date the Gospels to a far later date with little connection to historical events.

This would seems understandable for anyone wishing to debunk the historical foundation of Christianity, but it is baffling that most of this scholarship comes from Christian biblical scholars.

It’s no wonder, then, that Sheridan dolefully states that most believing Christians more or less ignore biblical scholarship.

Sheridan has an excellent chapter on Christ and popular culture.

Since the 1960s, the default position of popular culture towards Christianity has been simple ignorance at best and open hostility at worst.

Prior to the 60s, Hollywood took a benign or even positive view of the Church and its role in society (witness the clerical roles of Bing Crosby, Spencer Tracey, and Gregory Peck).

Although this positive view has waned, Sheridan highlights some exceptions: the sitcom, Jane the Virgin, the film, Deepwater Horizon, the TV cop show, Blueblood, and the recent biopic of Mr Rogers, A Beautiful Day in the Neighbourhood. He also notes the unfortunate development of saccharine pop spirituality, so beloved of Oprah Winfrey, in works such at Eat, Pray and Love, and which sometimes has Christian overtones in a series like, Sweet Magnolias. One area that Sheridan doesn’t mention here and which, I think, has much to offer for the Christian evangelist is the material in popular culture that uses Christian themes and symbols in a more implicit way.

Among contemporary filmmakers, the brilliant, eccentric Coen Brothers, Clint Eastwood, and Martin Scorsese, are the most famous that explore theological questions.

The second part of the book, exploring the lives of various Christians, highlights Sheridan’s journalistic talent for interviewing.

Particularly moving is the interview with former Deputy Prime Minister, John Anderson, whose Christian faith has developed and matured despite personal tragedy.

Sheridan is happy to include the not so famous as well as more notable men and women of faith.

I particularly enjoyed hearing about the very practical witness of Gemma Sisia who has devoted her life to establishing schools in Tanzania, and the boldness of Campion College graduate, Frances Cantrell, founder of the Culture Project, a group of missionaries that devote themselves to spreading the message of Christian dignity to young people.

He loves meeting people, telling stories, and though his message is urgent, he is no bible basher, preferring a Christianity that proposes rather than imposes.

It is also worth noting that Sheridan’s book is truly ecumenical, seeing the good in multiple traditions; and this is also important in such a pluralistic country as Australia.

It is a book that believers, strong and lukewarm, as well as agnostics and sceptics will greatly profit.

At the very least, Sheridan is to be applauded in his attempt to reverse the appalling religious illiteracy that besets out nation.

Christians: The Urgent Case for Jesus in our World is available from online book stores, including Booktopia, Koorong, BIG W and Dymocks.

The above review appeared in The Record on 3 November 2021.

Watch a podcast discussion between Greg Sheridan and Paul Morrissey on the book here: