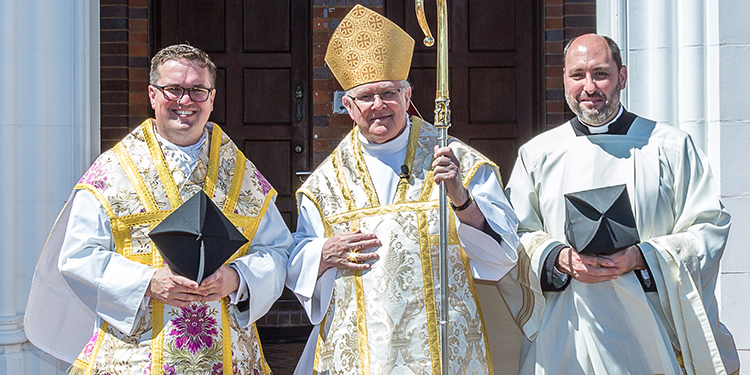 Campion graduate Conor Power was ordained to the priesthood in the Brisbane Oratory on Saturday 11 September 2021, becoming the first man to do so.

Below is an excerpt from an interview The Catholic Leader did with Fr Power shortly after his ordination. Fr Power is now the second Campion alumnus to be ordained, following Fr Reginald Chua in December 2020. See the article below:

Fr Power said it was a “beautiful” Mass with his mum and siblings supporting him as well as friends from the Brisbane Oratory community.

When Brisbane Archbishop Mark Coleridge laid his hands upon him to ordain him, Fr Power said there was a profound feeling of the culmination of all his years in formation.

“When you feel his hands lay upon your head, it becomes all very real and brings everything together into that one moment,” he said.

He had spent seven years anticipating the moment – three years at Toronto Oratory learning philosophy and the meaning of an Oratorian vocation from the priests there, two years in Rome studying theology, and the last few years back in Australia, completing his studies and serving as a deacon in the Annerley-Ekibin parish.

He said without them, there was no Brisbane Oratory.

“I wouldn’t have this place to call my home,” he said.

“They have been with me since day one.”

The idea of living and ministering in an Oratory community was central to his choice of vocation, he said.

The life of an Oratory priest was stable and enduring because Oratorians committed themselves to one parish for the rest of their lives.

Fr Power said this was deeply attractive to him because it meant he could journey with families in his community across their entire lives.

“It gives us the great ability and great gift to get to know your parishioners in a truly sincere, genuine and deep way,” he said.

“As you’re maturing and growing and going through your own priestly ministry, you’re also there side by side with the families and members of the parish in their hardships and in their moments of joy.

“You get to see that throughout the entire lifespan of a family.”

At the heart of the community were the Sacraments of Holy Mass and Penance.

Fr Power had heard his first confessions only 30 minutes prior to the interview with The Catholic Leader and said it was a “deeply humbling” experience.

“It’s a great grace of God to be able to provide that for people, so that they know the Church door is always open,” he said.

Read the full article on The Catholic Leader’s website.