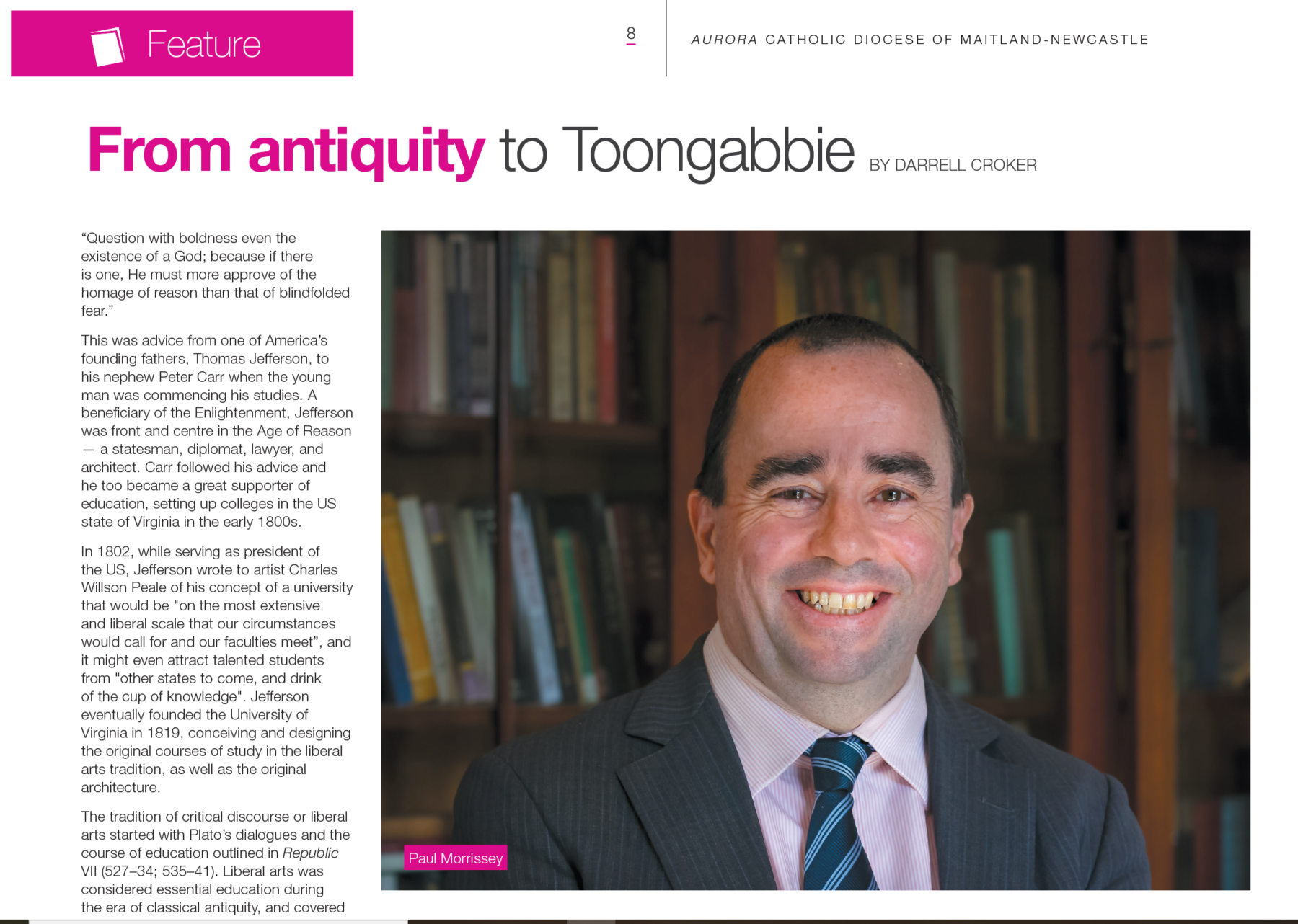 The Aurora Magazine has featured Campion College in an article about the liberal arts in this month’s issue.

The article, by Darrell Croker, explores the origins of liberal arts colleges in the United States, and then looks at how Campion College followed these examples to create a unique institution in Australia.

While liberal arts has long had an established place in the US higher education system, it has only recently resurfaced in continental Europe, where it originated. And now Campion College, in Toongabbie in Sydney’s west, describes itself as Australia’s first Catholic liberal arts institution.

Campion president Paul Morrissey says the college’s degree is designed as foundational education, teaching students to think critically about the world through the disciplines of philosophy, theology, history and literature.

“Students who complete a liberal arts degree gain ‘soft skills’, such as critical analysis, effective communication and even proficient literacy, which are designed to be applied to any field of work,” Dr Morrissey said. “There is more and more evidence these kinds of soft skills are increasingly sought-after.”

Liberal arts is not in competition with STEM (science, technology, engineering and maths), but is complementary. Business, it seems, wants self-motivated and articulate workers who can think on their own. It’s not enough just to have tech skills.

Ideally, students attending Campion complete an undergraduate liberal arts degree, and then go on to specialise in postgraduate study and/or specific qualifications. Those three years as an undergrad do provide enough soft skills to enter the workforce, but also time to formulate other career plans.

Campion is still a young institution but did make the news during the Ramsay Centre for Western Civilisation’s search for a home. “The Ramsay Centre is simply trying to do what Campion is doing, and that is preserving and imparting the history, literature and ideas of the West,” Dr Morrissey said. “A liberal arts degree is about thinking critically, and that includes examining Western civilisation itself.”

Dr Morrissey acknowledges the “long, proud history” liberal arts colleges have in the US. “Campion is on its own little frontier introducing a liberal arts degree to Australians,” he said. “But we feel what we’re doing is vitally important; that is, preserving the great cultural heritage of Western civilisation in a political climate that is increasingly hostile to its own past.”

Read this issue of Aurora here.