We eradicate the humanities at our peril – Dr Luciano Boschiero 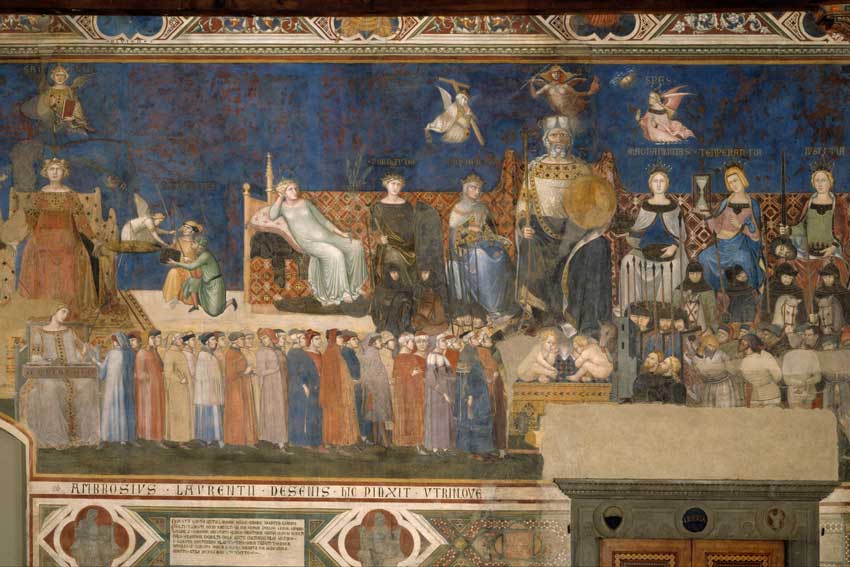 Campion Dean and history lecturer Dr Luciano Boschiero has used an Italian fresco from the Renaissance to illustrate why the humanities are inherently valuable and worth studying, in a piece for the Catholic Weekly.

If you would like a simple and clear artistic expression of why the Federal Government’s proposed reform of university funding, especially the reduced support for the humanities, is so wrong-headed, let me draw your attention to a fresco in Siena, Italy.

After we defeat the Coronavirus and lift the travel restrictions, I recommend you see this artwork and appreciate why Humanities students must not—and will not—be bullied into dropping their interests for the sake of the government’s presumed future job market.

This fresco, in Siena’s Palazzo Pubblico — the city’s town hall, if you will, during the Renaissance — is known as The Allegory of Good and Bad Government. It was painted in the 1330s by Ambrogio Lorenzetti and stretches across three adjoining walls. It was commissioned by the governors of Siena and intended to be a reminder of their duties — perhaps something similar is needed in Canberra overhanging the Cabinet room.

The main fresco representing good government contains one large allegorical figure; a male personification of the Common Good. He is surrounded by allegories of Peace, Bravery, Prudence, Magnanimity, Temperance, and Justice. 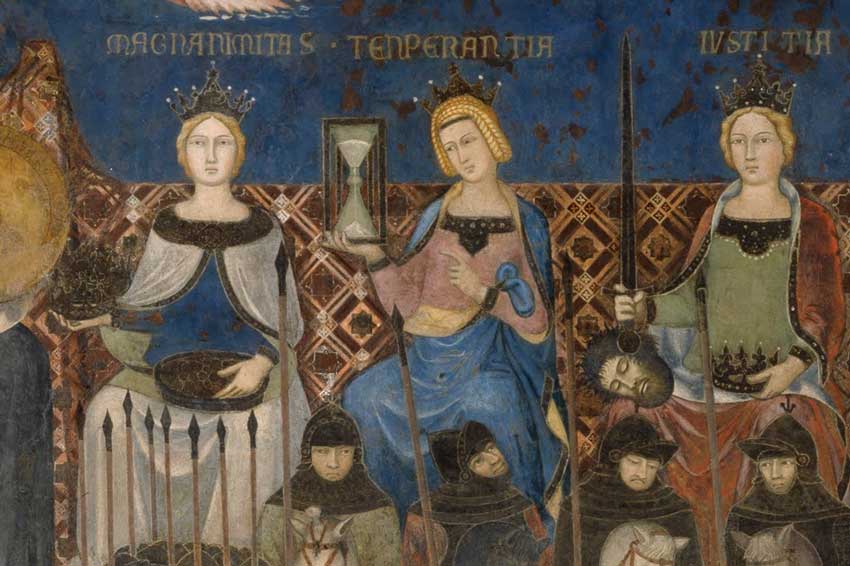 Beneath him, the citizens of Siena carry intertwined cords, seemingly dispensed by Justice, assisted by Wisdom and Harmony. The people are, in other words, united. The people of Siena also submit to the Common Good through the offering of taxes and tributes, even acknowledging that the nobles among them owe their positions of privilege to the city. 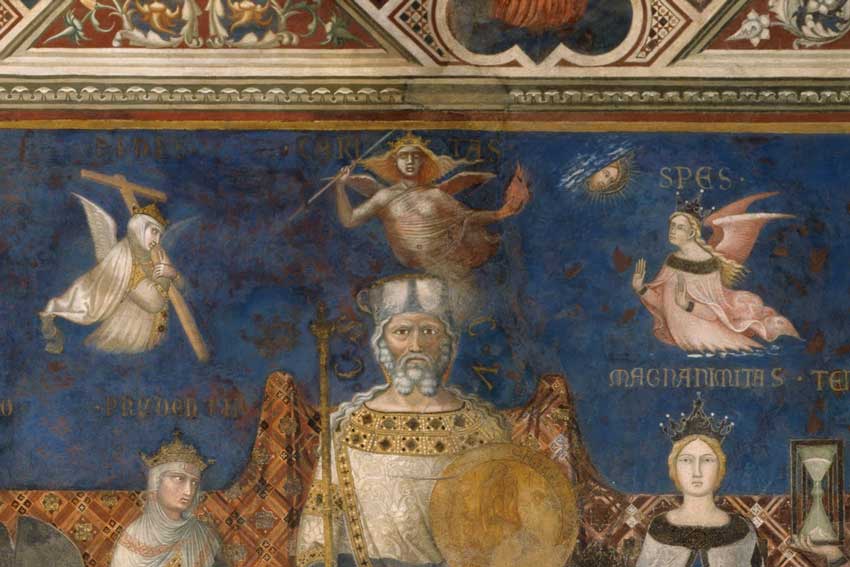 Above them all, float representations of the virtues of Faith, Hope and Charity. The effects of a good government, observant of the virtues, is depicted on an adjoining wall. Symbols of manufacturing, construction, trade, and civic harmony abound, as well as a peaceful connection between the people and their land. 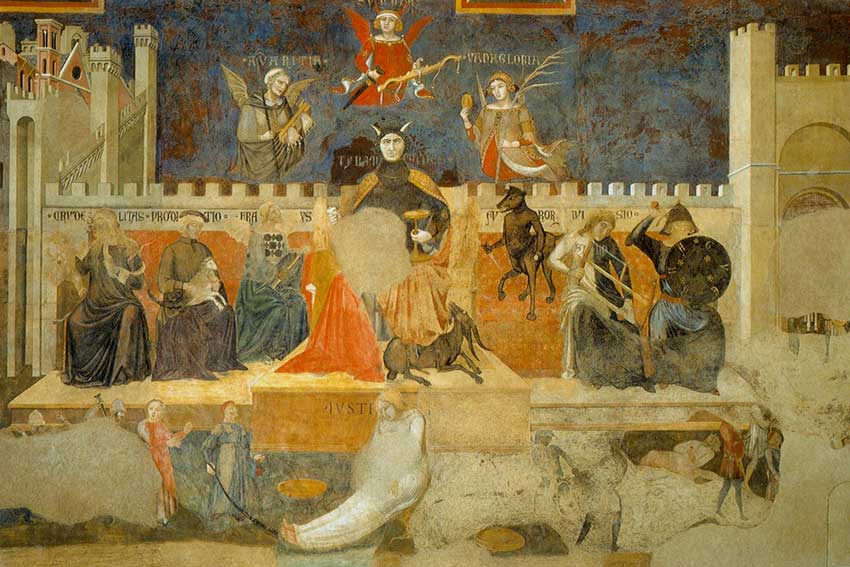 Bad government and its results are depicted on the opposing wall. Here, greed, lust, cruelty, and material gain are evidently causing the destruction of the virtues, including the death of Justice and the decay of the land. The message is abundantly clear: to achieve a peaceful, just democracy, the virtues must be upheld and protected.

The presence of Wisdom, floating above Justice, is especially important in this respect, because it was well known during the Renaissance that the study of Philosophy (the word literally translated from Latin as ‘love of wisdom’), was the pathway to personal growth, good governance, and civic harmony. And to study Philosophy, meant pursuing the combination of language, music, mathematics, rhetoric, and logic. These were the basics of an undergraduate career in the medieval universities, and remained so into the modern age. Central to these liberal arts, was Theology.

We find all these studies currently in our humanities departments and emphasised in our liberal arts colleges — yes, even Theology, or at least some version of this which might come in the form of Religious Studies — augmented by modern university disciplines, such as History and Sociology. I don’t believe, in my lifetime, I’ve ever heard a Prime Minister or Education Minister, speak of the importance of virtues in the study of the humanities and its positive effects on society.

I did, however, recently hear a recorded speech by Robert Menzies (founder of the modern Liberal Party that Scott Morrison now leads) in which he railed against job-focused specialisation at university.

The Prime Minister would do well to reflect on his predecessor’s message to the Headmaster of King’s School in Canterbury, UK: “When you sit down at the end of your academic year and contemplate the past 12 months, your greatest pride will be to feel that you have helped to create a substantial group of civilised citizens.”

If we continue to ignore the fundamental principles and importance of the humane sciences towards achieving good governance, this will only ultimately be to the peril of our tertiary education system, and our society as a whole.

Dr  Luciano Boschiero is the Dean of Studies at Campion College. He specialises in the history and philosophy of early modern science – particularly scientific academies in the seventeenth and eighteenth centuries. He is also interested in the history of universities and has edited a book on the topic: On the Purpose of a University Education (Australian Scholarly Publishing, 2012). Luciano is Co-Editor of Metascience: Reviews for the History, Philosophy and Social Studies of Science (Springer) and is an Advisory Editor for Isis: An International Review Devoted to the History of Science and its Cultural Influences (University of Chicago Press).

Read the article in the Catholic Weekly online.

*The fee increases for humanities degrees do not affect Campion, a private institution.