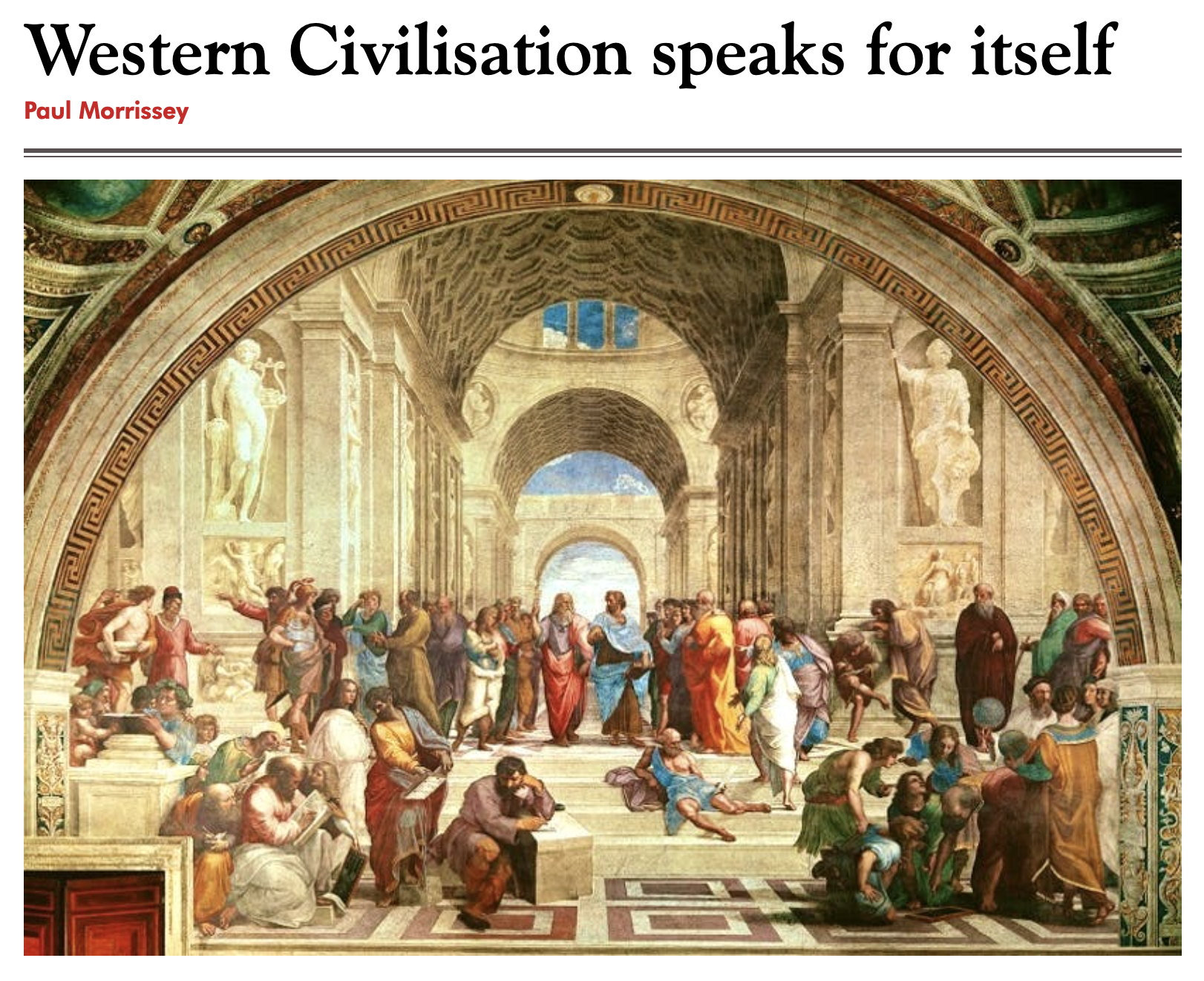 Campion president Dr Paul Morrissey has written a strong defence of the study of Western Civilisation in today’s Spectator online:

There’s been a bit of buzz in the news this week about the Ramsay Centre’s new Bachelor of Arts degrees in Western Civilisation, which are about to begin at the universities of Queensland and Wollongong.

As president of a liberal arts college which exclusively teaches a similar degree, I’m very encouraged to see more of Australia’s youth delving into the riches of our Western history and tradition.

The Australian’s Janet Albrechtsen wrote on Wednesday that while this is good news, there is opposition to the degrees by politically correct bodies within universities. She stated:

There is nothing objectionable, or threatening, about students learning about Western civilisation in a chronologically ordered fashion, undertaking a philosophical adventure through the major periods and epochs of intellectual and artistic change in the West.

She’s absolutely correct, but I would go a step further and say that studying the Western tradition positively impacts and actually improves the lives of those who study it.

Time and time again I’ve witnessed students flourish in an environment where studying the ideas and events that have shaped Western civilisation forms the core of the curriculum.

Our students at Campion College have said studying thinkers from Plato to Marx “encourages [them] to critically evaluate cultural ideas and norms, and to question accepted ideas” while our alumni tell us how their degree continues to benefit them in their professions and further studies. One of our alumni recently commented that Campion’s degree didn’t directly qualify her for any of the jobs she’s held since graduating, but “it has proved eminently applicable in every context nonetheless”.

Studying the history, literary texts and philosophical ideas of the West cannot help but fundamentally affect how you see the world. You can’t study a law degree the same way if you haven’t learned how the development of common law in texts such as the Magna Carta came into being. You can’t truly appreciate the perennial relevance of a classic work such as Milton’s “Paradise Lost” without studying medieval theology and philosophy.

It even changes the way you watch films. The eccentrically brilliant films of the Coen brothers, for instance, are immeasurably deepened through an understanding of biblical theology (A Simple Man), classical history and literature (O Brother Where art Thou), and moral philosophy (True Grit). Studying the liberal arts opens up a whole new layer to all one reads and watches, allowing you to gain insights you never had before.

Steve Jobs identified this when he stated those working at Apple needed more than mere technical skills; they needed this kind of perspective. When launching the second version of the iPad, he stated, “It is in Apple’s DNA that technology alone is not enough – it’s technology married with liberal arts, married with the humanities, that yields us the results that make our heart sing.”

In a wonderful article in the American Conservative, S.A. Dance writes, “To study the humanities is to explore nothing less than the meaning of life itself, which leads to a greater understanding of virtue and justice. This cannot be the privileged knowledge of those who ‘don’t like math,’ but should be the lifeblood of the university.” And this is why it is so pleasing to see these new degrees at two of our big universities.

However, if there is a danger of identity politics infiltrating these Bachelor of Arts degrees, that would be disappointing indeed.
We need to move past the idea that studying Western civilisation is somehow harmful. How can studying the past – warts and all – be harmful? An objective look at the facts of our history, which all ‘great books’ degrees should do, can only help our society on the whole. As our patron St Edmund Campion once said, “we must look where we have been in order to know where we are going”.

I have high hopes for the Ramsay Centre’s Western Civilisation degrees – I hope they bear much fruit in bringing about a needed renaissance of classical, liberal learning in our higher education institutions. I have been fortunate to see how much young people enjoy being exposed to the most important events and ideas of the past. I am sure the same will be the case with these new degrees.

Australia needs more graduates who have stood on the shoulders of intellectual giants, who have reflected deeply about the human person and the good life, and who will thus be best placed to understand and solve the many problems of the contemporary age.