Anna has been pursuing a musical career after graduating from Campion in 2019, and recently won the Songwriters’ on the Rocks live music competition in Sydney. We chatted with her about what this journey has been like and what’s in store.

How soon after graduating from Campion did you create Anna Thérèse?

I graduated the end of 2019 and started up my music page early 2020, so I pretty much jumped straight into it. I never had a gap-year and I felt that with my degree finished and no one depending on me yet financially, now was as good a time as any to go all out with the “starving artist” thing. I didn’t particularly think it would lead anywhere – I mainly just wanted to spend a year doing what I enjoyed. But people have been really supportive and encouraging so far, and it’s proving surprisingly sustainable, so that’s nice.

How would you describe your musical style?

I’d say most of the Anna Thérèse stuff lands somewhere between acoustic folk and emo music. It’s on the softer side, very melody-driven and employing a lot of folksy fingerstyle technique, but I borrow a bit from the emo aesthetic in the way I construct chords, write lyrics, etc. It’s your classic sad-kid indie-folk, really. Certainly lends itself more to introspection than dancing the night away.

What have been some of the highlights for you launching into a solo music career?

Gigging has just been a whole heap of fun. I’ve played some great shows this year: Oxford Art Factory, The Factory Theatre, The Basement – places I’ve seen some of my favourite artists perform. It’s surreal sitting backstage thinking, ‘Oh wow – Phoebe Bridgers did her stage makeup here. And Laura Marling. And Lucy Dacus.’ The music has given me some fun excuses to travel, too. I played in Tassie and the ACT earlier this year and I’ll be playing a show in Melbourne at The Toff in Town soon, COVID permitting.

The standout moment, though, was performing in the NSW ‘Songwriters at the Rocks’ competition, which I ended up winning and taking home $15K worth of music industry assistance for covering recording, merch production, accounting, mentoring, food and clothing costs. It’s pretty wild. Obviously it’ll help in a big way with kickstarting the next phase of my project, but it was also just a cool experience getting to share my music with a whole heap of strangers and receiving such encouraging feedback from industry professionals. 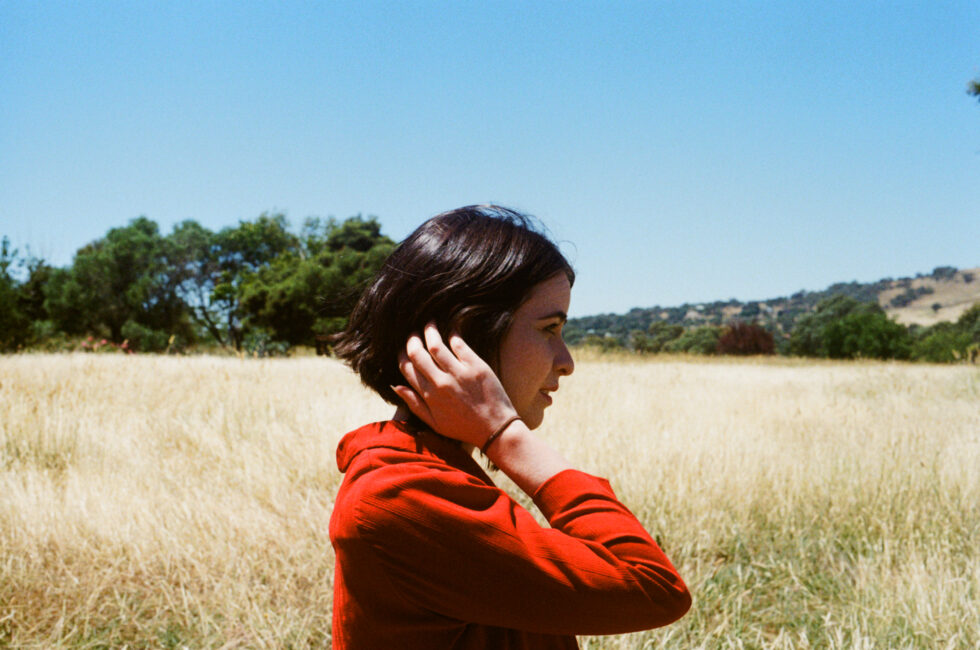 What was the inspiration for Anna Thérèse?

I’ve always had some kind of music project on the go, but mostly in collaboration with other people, which can feel less personal and more like an intellectual/artistic exercise. Don’t get me wrong: I love writing collaboratively. It’s great for generating new ideas, exploring different genres, etc. But I think there came a point where I felt the need to write songs that were more specific to my own core tastes and experiences. I noticed that I was turning to song-writing less for “fun” and more for “catharsis” – for a “confessional” kind of experience. I think that’s what sets this project apart from my other endeavours. And I think that’s what I’m attracted to in a lot of the songwriters I admire – Joni Mitchell, Adrianne Lenker, Sufjan Stevens: a level of vulnerability and specificity.

Did your degree and/or your time at Campion help you in any way with doing this, and if so, how?

Absolutely. I think it’s made me a much better artist and entrepreneur, as well as given me confidence in the value of the arts for the health of a culture. I think studying the liberal arts increases your capacity for openness and humility: the more you learn, the less you realise you know for certain. And I think those values are essential for good song-writing. No one enjoys music that is overly didactic or moralising (with the exceptions, perhaps, of Sacred music and children’s works, and maybe not even then). An attitude of simply “saying your bit” is far more conducive to good art, in my opinion, and it’s an attitude that’s hard to avoid developing when your “knock-down argument” is picked apart by your classmates during a literature tutorial for the fiftieth time.

…studying the liberal arts increases your capacity for openness and humility: the more you learn, the less you realise you know for certain. 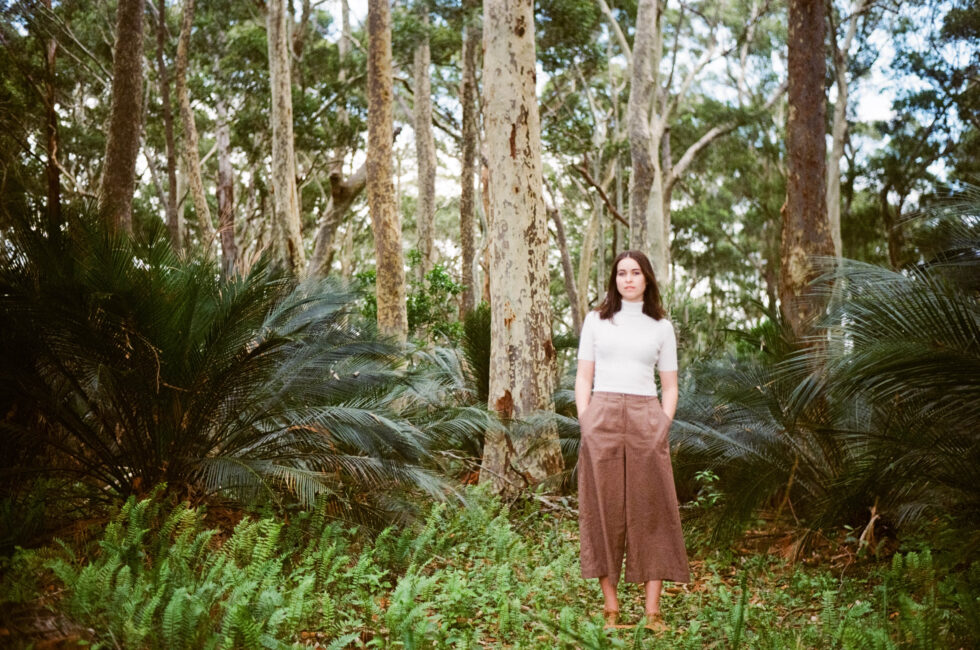 Anna delved into her passion while still a student at Campion and launched Anna Thérèse in early 2020.

The constant exposure to new concepts and information you get with the liberal arts also primes your brain for entrepreneurial pursuits, I think. It teaches you how to research, analyse and critique existing ways of doing things, and to generate left of field ideas for achieving the same results, or better.

Most of all, though, my time studying the great thinkers and writers of the world at Campion convinced me that art and reflection are as essential to the health and sanity of a society as technology and science are to its survival. History testifies to the capacity of the arts to impact a culture and direct its course, so I’m reassured that in pursuing music, I’m doing something of real worth and concrete application.

What has it been like being a musician in these difficult and trying times?

Obviously it’s a pretty awful time for the music industry, and anyone in events really. In a way I feel kind of lucky to be a small artist: smaller crowds mean higher chances of gigs going ahead. I’d hate to be a mid-tier indie artist who needs the income but hasn’t been able to gig for most of the year. If people want to support artists they love right now, my advice would be BUY THEIR MERCH. It’s the second-biggest revenue stream after ticket sales, and one of the few options available to us at the moment.

All that said, there have been some positives to come out of the lockdowns. I might not have started my music page if I wasn’t so desperate to escape the boredom of the first lockdown! And I’m using the extra time at the moment to finish writing my debut EP, which is exciting. One of my Campion history lecturers said once that when societies become too comfortable and stable, the arts tend to go into decline. So I don’t know – perhaps a bit of struggle is necessary to stoke the creative fire. Maybe this is the year I write my magnum opus. (Or maybe I just develop Vitamin D deficiency and chronic fatigue. We’ll see.) 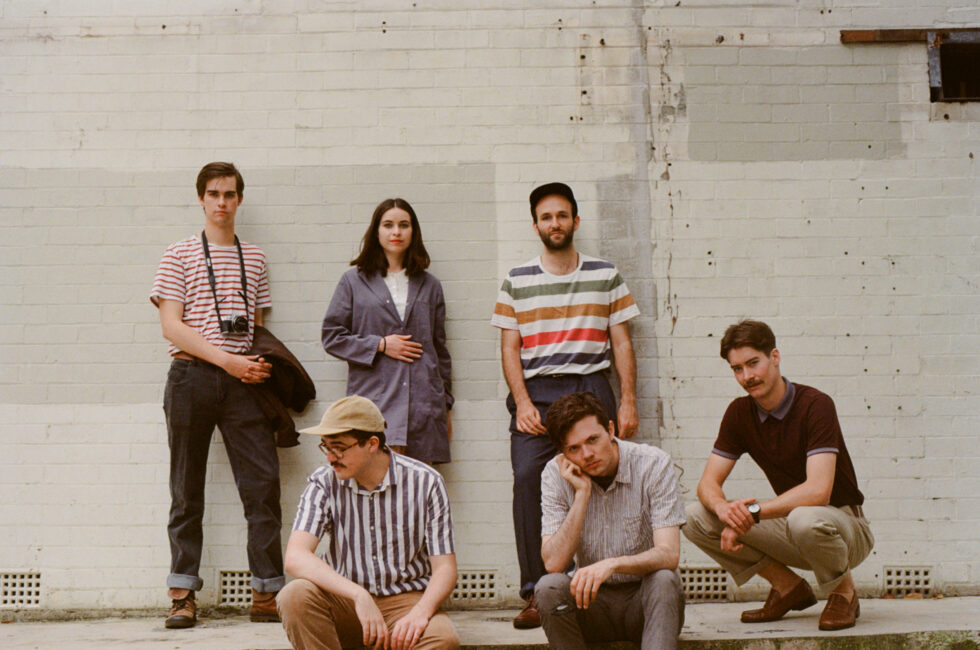 You’re also part of another musical group, Kirks & Company – tell me a bit about this.

Kirks & Company are a six-piece folk-rock outfit I’m currently directing and performing in, along with my brothers Thomas and Aodhan, our cousin Declan, and our friends Nick Barry and Rob van Gend. It’s a very unique sound and concept; I would recommend getting around it. The hallmark characteristics of our music are probably lush vocal harmonies, multi-layered arrangements, big, industrial atmospheres and a distinctive Irish folk influence. It’s very extra. Cinematic, even. You can definitely detect the liberal arts influence in the lyricism as well. A lot of the material was written during my time at Campion, and two of our members, Robert and Aodhan, are also Campion graduates. Kirks & Co. is definitely a melting pot of philosophical ideas and literary influences. But it seems to work for people!

All three of the singles we released earlier this year received Top 10 placements on the Triple J Unearthed charts. Our second single Maron peaked at No. 1 for the Indie category and No. 4 across the board. We’ve got an EP due to come out in the next couple of months and are keen to start gigging once the lockdowns settle down, so keep an eye out for that. People can follow our Instagram to stay in the loop and see what we’re up to. (Same goes for Anna Thérèse!)

What are your short and long-term goals with Anna Therese?
The next big thing on the horizon is to get a body of original work recorded, released and promoted. I haven’t actually put any of my originals out yet. I collaborated with my friend Tom RV on an indie pop series late last year and put it on Spotify, but that was all cover stuff. It’ll be very different having my own songs out in the world and available for people to listen to. Part of the prize for the Songwriters at the Rocks competition covers recording time at The Grove Studios, which I’m super excited about. Itching to get out there and get things rolling once lockdown is over. 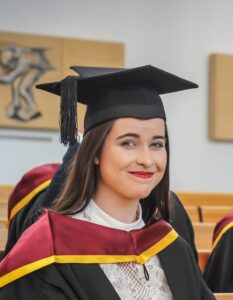 Anna at her graduation.

Long-term, I don’t really have a goal other than to be industrious, flexible and discerning, and to stay open to opportunities that come my way. It seems to be the most fruitful approach for me: don’t over-plan, keep learning/experimenting/upskilling, say yes to what feels valuable and meaningful in the moment, and see where things go!