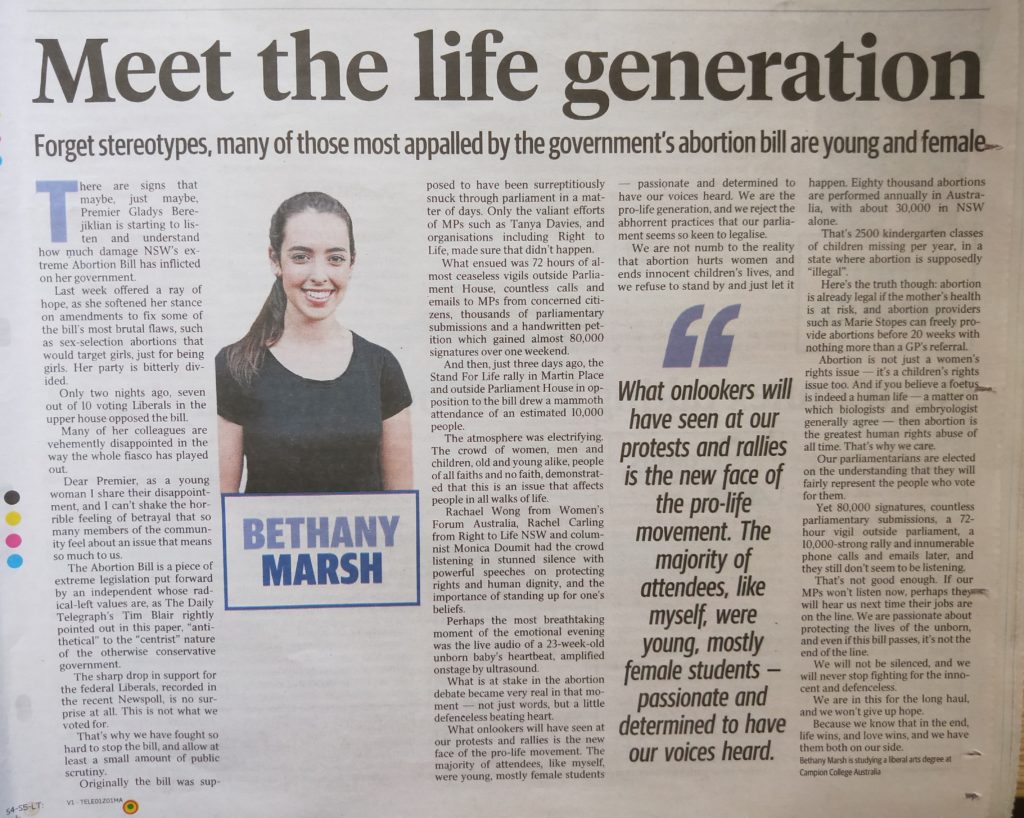 Campion College third-year student Bethany Marsh has made it into the Daily Telegraph newspaper with an op-ed on the NSW abortion bill.

Bethany, who has been very proactive in protesting the legislation over the past few weeks, has given her take on the fallout from the bill in NSW, as one of the “new faces of the pro-life generation”.

Bethany and fellow students at Campion have rallied outside parliament over the past few weeks to protest the bill, as well as joining in the huge pro-life rally in Sydney on Tuesday night.

Below is the text of the article, published in today’s Daily Telegraph, reproduced with the permission of the author:

There are signs that maybe, just maybe, Premier Gladys Berejiklian is starting to listen and understand how much damage NSW’s extreme abortion bill has inflicted on her government.

Last week offered a ray of hope, as she softened her stance on amendments to fix some of the bill’s most brutal flaws, such as sex-selection abortions that would target girls, just for being girls. Her party is bitterly divided.

Only two nights ago, seven out of 10 voting Liberals in the upper house opposed the bill.

Many of her colleagues are vehemently disappointed in the way the whole fiasco has played out.

Dear Premier, as a young woman I share their disappointment, and I can’t shake the horrible feeling of betrayal that so many members of the community feel about an issue that means so much to us.

The Abortion Bill is a piece of extreme legislation put forward by an independent whose radical-left values are, as The Daily Telegraph’s Tim Blair rightly pointed out in this paper, “antithetical” to the “centrist” nature of the otherwise conservative government.

The sharp drop in support for the federal Liberals, recorded in the recent Newspoll, is no surprise at all. This is not what we voted for.

That’s why we have fought so hard to stop the bill, and allow at least a small amount of public scrutiny.

Originally the bill was supposed to have been surreptitiously snuck through parliament in a matter of days. Only the valiant efforts of MPs such as Tanya Davies, and organisations including Right to Life, made sure that didn’t happen.

What ensued was 72 hours of almost ceaseless vigils outside Parliament House, countless calls and emails to MPs from concerned citizens, thousands of parliamentary submissions and a handwritten petition which gained almost 80,000 signatures over one weekend.

And then, just three days ago, the Stand For Life rally in Martin Place and outside Parliament House in opposition to the bill drew a mammoth attendance of an estimated 10,000 people.

The atmosphere was electrifying. The crowd of women, men and children, old and young alike, people of all faiths and no faith, demonstrated that this is an issue that affects people in all walks of life.

Rachael Wong from Women’s Forum Australia, Rachel Carling from Right to Life NSW and columnist Monica Doumit had the crowd listening in stunned silence with powerful speeches on protecting rights and human dignity, and the importance of standing up for one’s beliefs.

Perhaps the most breathtaking moment of the emotional evening was the live audio of a 23-week-old unborn baby’s heartbeat, amplified onstage by ultrasound.

What is at stake in the abortion debate became very real in that moment — not just words, but a little defenceless beating heart.

What onlookers will have seen at our protests and rallies is the new face of the pro-life movement. The majority of attendees, like myself, were young, mostly female students — passionate and determined to have our voices heard.

We are the pro-life generation, and we reject the abhorrent practices that our parliament seems so keen to legalise.

We are not numb to the reality that abortion hurts women and ends innocent children’s lives, and we refuse to stand by and just let it happen. Eighty thousand abortions are performed annually in Australia, with about 30,000 in NSW alone.

That’s 2500 kindergarten classes of children missing per year, in a state where abortion is supposedly “illegal”.

Here’s the truth though: abortion is already legal if the mother’s health is at risk, and abortion providers such as Marie Stopes can freely provide abortions before 20 weeks with nothing more than a GP’s referral.

Abortion is not just a women’s rights issue — it’s a children’s rights issue too. And if you believe a foetus is indeed a human life — a matter on which biologists and embryologist generally agree — then abortion is the greatest human rights abuse of all time. That’s why we care.

Our parliamentarians are elected on the understanding that they will fairly represent the people who vote for them.

Yet 80,000 signatures, countless parliamentary submissions, a 72-hour vigil outside parliament, a 10,000-strong rally and innumerable phone calls and emails later, and they still don’t seem to be listening.

That’s not good enough. If our MPs won’t listen now, perhaps they will hear us next time their jobs are on the line. We are passionate about protecting the lives of the unborn, and even if this bill passes, it’s not the end of the line.

We will not be silenced, and we will never stop fighting for the innocent and defenceless.

We are in this for the long haul, and we won’t give up hope.

Because we know that in the end, life wins, and love wins, and we have them both on our side.