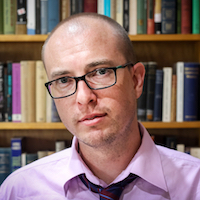 Colin Dray currently teaches Literature at Campion College Australia. He holds a PhD in English from the University of Sydney (2009), where his thesis offered an interdisciplinary study exploring the intersections of Literature and Philosophy. He has both a Bachelor of Arts with Distinction in English (2001) and a Bachelor of Creative Arts with First Class Honours in Creative Writing (2003) from the University of Wollongong.

Before joining Campion College he had taught Creative Writing Prose (Theory and Practice) within the School of Journalism and Creative Writing, Faculty of Creative Arts, University of Wollongong (2003-2010).

Colin also publishes fiction. His first novel, Sign, was published through Allen & Unwin in 2018 and his short fiction has appeared  in Meanjin and through Ginninderra Press. Examples of this literary criticism have been published in Australian Literary Studies and Antipodes, and he is a columnist at Popmatters.